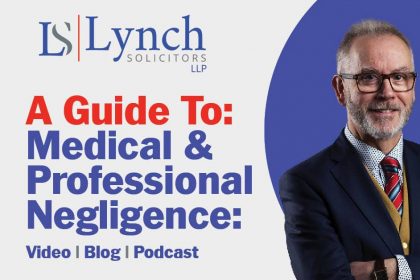 Medical Negligence is an act or omission by a health care professional which is below the accepted standard of care and which results in injury or death to a patient.

Medical negligence is a rapidly expanding area of litigation in Ireland.

How does Medical Negligence occur?

Medical negligence can happen because of:

How does medical negligence occur through – Diagnosis – ( i.e. misdiagnosis or delayed diagnosis)?

Here is an example: In one case a patient died of a brain hemorrhage.  He attended his GP several times before his death complaining of headaches.  He was sent to casualty but was not admitted and the next day he was admitted again, unconscious, and died soon after.  The High Court found that the GP was negligent because he did not take into account the man’s version of events and his detailed accounts of the seriousness of his symptoms.  The Supreme Court also found in favour of the plaintiff, but on the grounds that where the casualty officer ignores and does not follow up on a referral letter, it is an “inherently defective” practice and is negligent.

Early detection is vital as it enables timely medical treatment, and in many cases the patient can be cured.  There are unfortunately many cancer sufferers who are misdiagnosed as not having cancer.  Our experience in dealing with these cases shows that there are several reasons why a cancer misdiagnosis can occur – most of them as a result of human error or a lack of skill. A doctor may not respond appropriately when a patient presents displaying symptoms of cancer- there may be a failure to thoroughly examine or a failure to recognise the symptoms and signs of cancer.  There may be a failure to refer to a cancer specialist or a failure to appropriately monitor a patient who has a family history of cancer. In a great number of cases that have come before the Courts it has been shown that laboratory results and scans are often misinterpreted by technicians too frequently.

John Lynch, Senior Partner at Lynch Solicitors looks at the issues associated with medical negligence and talks about recent cases in Ireland such as the Morrisey case from March 2020 and the Feeney judgment from May 2020.

How could the treatment a patient receives amount to medical negligence?

In another case, the claimant’s husband had surgery to remove a tumour in his throat.  On the second night after the surgery, the tracheotomy tube was put out of place.  By the time the airway passage was established the man was brain dead.  The case was brought on the grounds that the surgeon allowed his patient to recover in ICU where there was no-one trained to replace a tracheotomy tube.  The defendants disputed liability on the principle of “general and approved practice”.  The Court acknowledged that nurses in Ireland are not specially trained to change tubes of this type and that no negligence, therefore, arose on this point.  However, he also noted that this was an emergency situation that required special training.  The Court found that failure to have a person, nurse, or doctor in the ICU who was trained in the replacement of a tracheotomy tube, under the circumstances, was an “inherent defect”.  The surgeon was found guilty of negligence because the deceased would not have died if a trained person been present in ICU.

How could medical negligence occur due to Disclosure?

– i.e. failure to inform the patient of the risks of the treatment of procedure?

An example of a case due to a failure to disclose arose in 2000.  The Plaintiff underwent a bone graft for a dental implant procedure.  Before the operation, the practitioner told the plaintiff that there was no guarantee that there wouldn’t be unforeseen complications.  However, he did not disclose to the plaintiff that there was a risk of chronic neuropathic pain, which resulted.  The Courts found that since the injury was a known and foreseeable consequence of damaging a nerve, the fact that it was unlikely was irrelevant.  The Court found that the standards of disclosure for medical practitioners should be set by patients instead of set by doctors for doctors.

the severity of the consequences, the frequency of risk, and the patient’s particular circumstances prior to the surgery.

How would you know if you have a claim in Medical Negligence?

If you, or a family member, have suffered an injury due to the actions or inactions of a medical professional you may be entitled to compensation.  You will be able to discuss the facts of your situation, in detail, with a member of our medical negligence team.  As experts in the area of medical negligence litigation, we will assess your complaint and assist you in reaching a decision on whether to make the claim or at the very least investigating it further.

How is Medical Negligence proven?

There are four main steps in proving medical negligence:

What steps do does the solicitor take to establish a possible case or “cause of action”?

Clinical negligence cases can be settled by negotiation without the need to proceed to a full trial but they are rarely resolved without starting court action.

When is it too late to take a case?

Each area of law operates under different limitation periods which are based on fixed periods.  In certain cases, an extra dimension comes into play: known as the knowledge principle. This principle comes to the fore in cases involving medical negligence and personal injury which as a starting point sets out a strict time limit of two years for an action to be brought before the court. However, if you didn’t know or had no way of knowing that there was a problem, the two-year limitation period may not begin until you first had knowledge that something was wrong.

Medical Negligence is a very sensitive and complex area of law.

Things go wrong in hospitals and other medical environments.

When they do, they affect people at a time when they are extremely vulnerable.

It is often difficult for users of medical services to know if a bad outcome is or is not as a result of negligence.

There is a need to know what action to take when they need answers.

All the time in the world – Statute of Limitations

The Statute of Limitations sets out the length of time a person has to make a claim as a result of an action or omission that gives rise to the claim.

Once the specified time has passed an action can no longer be brought.

The logic is grounded on common sense principles: after a certain length of time it is impossible to get accurate evidence – be it witnesses, people’s recollection etc. and the threat of legal action cannot hang over a person for an indefinite time.

Therefore, the law stepped in with the concept of the Statute of Limitations.

Read the full article about the statute of limitations here.

DISCLAIMER: The material contained in this blog is provided for general information purposes only and does not amount to legal or other professional advice. While every care has been taken in the preparation of the information, we advise you to seek specific advice from us about any legal decision or course of action.