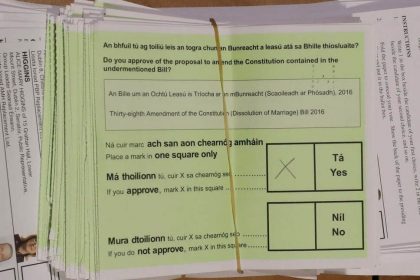 The four year waiting period is still the law and will remain the law until the Government enacts amending legislation.

WHAT THE VOTE MEANS……

Until now, couples could only apply for a Divorce if they had been living apart for four of the last five years.

The passing of the Referendum and the amendment to the Consitution essentially gives the Government the power to enact legislation to reduce the waiting period for Divorce.

The Government has said it will legislate to bring the period down to two years.

But while this result has been widely welcomed, Gillian O’Mahony who heads up the Family law department at Lynch solicitors is warning that more reforms are needed within the Family courts system.

What changes are needed?

The Government has also been called on by the Law Socity to deliver on its commitments and prioritise the modernisation of the family law courts system.

Family breakdown, child custody and protection of minors are some of the most difficult and sensitive court proceedings that exist.The current Court system that exists for hearing family law matters is wholly inadequate particularly in circumstances where  case-loads increase, unacceptable delays are experienced and facilities are inadequate.

The system as a whole needs urgent review, including the provision of dedicated and experienced judges, with the appropriate administrative support structures to improve the capacity and efficiency of the system.

WILL WE SEE AN INFLUX OF DIVORCE PROCEEDINGS?

It is not expected that there will be an influx in Divorce proceedings.

It is however expected that the reduced waiting time period for a Divorce application will see a signficant decrease in applications for Judical Separation as it is expected that the parties will wait the two years rather than incurring the costs of two Court applications. We here at Lynch Solicitors, we have met with a number of Clients over the last while who have decided to await the results of the Referendum before deciding on how to proceed.

It’s important to remember that there had been fears of a similar influx of divorce and seperation following the 1995 Referendum, but this didn’t happen.

This Referendum result will modernise our divorce laws and we at Lynch Solicitors welcome the reduction in waiting times to two years.

What will change for couples seeking divorce

The two year time frame has not yet been legislated for, so couples will for the moment have to wait four years before issuing Divorce proceedings. When the two year time frame is introduced, it is important to remember that it will not change the plethora of decisions, both personal and financial that need to be considered by separating parties. So while the time frame may change, the decisions and considerations will all remain the same and the Court will still be obligated to ensure that proper provision is provided for both spouses and any dependent children of the marriage.