Vaginal mesh controversy – What to do if you’ve been affected 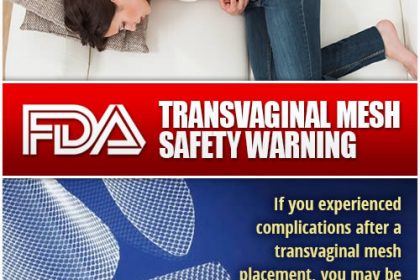 What is a vaginal mesh implant?

Meshes are used to treat stress incontinence, a condition that can lead to women leaking from their bladder when doing impact activities such as running and jumping, or when sneezing or coughing. The condition is very common in women after childbirth and at the menopause.

The meshes are also sometimes offered as a treatment for women suffering from pelvic organ prolapse.

What is Pelvic Organ Prolapse?

Pelvic organ prolapse affects up to half of women who have had children, and occurs when a pelvic organ – such as the bladder, rectum or uterus – “sags” and moves out of place. The bladder, rectal and uterine tissues then push into the vagina causing all sorts of symptoms, including:

Childbirth is a main source of trauma to the muscles and ligaments, and hormonal changes during the menopause also lead to muscles weakening and becoming less elastic. Heavy lifting can also cause damage to the pelvic organs and lead to prolapse. The condition also tends to run in families and is more common in women who are overweight.

How does it work?

The mesh is a net-like implant. The aim of the mesh is to give permanent support to the weakened organs and to repair damaged tissue.

Surgery can be done through the abdomen (transabdominal) or through the vagina (transvaginal). A small incision is made in the vaginal or abdominal wall, and the surgical mesh is implanted and held in place by sutures or tissue fixation devices. The idea is that tissue will grow into the pores of the mesh to create a wall of support. The procedure typically takes 30 minutes, is performed using keyhole surgery and patients often go home the same day.

In 2002, the first transvaginal mesh was approved to treat Pelvic Organ Prolapse in women. These meshes were inserted vaginally. And though surgical meshes have worked well for other conditions, such as hernias, in the past, these devices proved to be a disaster for many women.

What is the current controversy surrounding vaginal mesh?

These devices have been used across Europe, the United States and Australia since the early 2000s and while short-term trials have found low complication rates for implants that are used to treat stress incontinence, there is growing evidence that the efficacy is lower for devices used in women with pelvic prolapse – and complication rates are higher.

As the mesh became more widely used, women came forward suffering complications and class actions have been brought against manufacturers around the world. In 2012 the United States Food and Drug Administration reclassified transvaginal mesh as a high-risk device and thousands of patients in the US, UK and Australia have also reported significant issues with the devices. We represent a number of Women pursuing legal action over complications they suffered after receiving vaginal mesh implants.

The US Food and Drug Administration reclassified the transvaginal mesh implant as a high-risk device in 2012 and some 100,000 women there have filed lawsuits, but it is only recently that the issue was highlighted in the UK and Ireland and it is only recently that many of our Clients are making the the connection between their health issues and the device.

Federal Court Justice Anna Katzmann has told a packed courtroom that evidence was “overwhelmingly” against the companies after some women experienced “disastrous” results.

In a scathing commentary Justice Katzmann has slammed Johnson & Johnson and related companies Ethicon Inc and Ethicon Sarl for the release of nine pelvic mesh devices from 1999 with little evidence supporting their safe use.

The companies minimised known complications for years, regarded risk management assessments as a largely “tick a box exercise”, and failed post-marketing monitoring despite growing evidence of serious injuries to women, Justice Katzman found that the information provided to patients and surgeons by the Defendants had:

Examples of the Defendants’ misleading and deceptive conduct

By way of example of the Defendants’ misleadings and deceptive conduct, Judge Katzman highlighted:

” I am satisfied that, at all material times the Ethicon devices were or have been on the market, [Ethicon] engaged in a course of conduct which was misleading or deceptive or likely to mislead or deceive a not insignificant number of patients and surgeons as to both their safety and efficacy.”

The Australian Federal Court held that Johnson & Johnson and Ethicon breached their duty of care to the claimants. The Court stated that the risks were known not to be insignificant and on Ethicon’s own admission, they knew serious harm could ensue.

The level of compensation to be received by the Australian claimants will be decided on by the Court in February 2020.

It remains to be seen if Johnson & Johnson will appeal the decision.

The response of the Irish State to the Scandal

It is not clear that the scandal is receiving the attention it merits from the various state bodies who ought to take responsibility, including the Health Service Executive, the Department of Health and the Health Products Regulatory Authority.

The Chief Medical Officer recommended in July 2018 that a pause be put in place on the use of procedures involving synthetic mesh for treatment of stress urinary incontinence and pelvic organ prolapse.

The Health Products Regulatory Authority has stated that it is conducting a review of the regulatory aspects of these products as a matter of priority.

The Notice did acknowledge that “a significant cause of patient dissatisfaction is the difficulty in accessing services should serious complications develop. Such patients have a firmly held conviction that their needs are not being addressed to their satisfaction in Ireland.”

By way of addressing this, the HSE has convened a Response Group to address and propose remedies to these issues.

However, families report that there are few practical supports and services for those affected by the vaginal mesh implants.

How can we help?

Our medical negligence department has experience in assisting families who have been affected by defective and harmful medical products. If you or a member of your family have been affected by vaginal mesh implants, we will be happy to meet with you to explore the legal options available and to assist you in arriving at the truth of what happened.